DON'T WAIT! SIGN UP FOR THE 2014 SAVE-A-LIMB RIDE TEAM KAINER DIVISION!! RIDE WITH THE PROS. BE AWESOME. 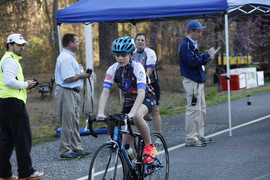 Jenna Strojny heads out on her winning ride for Team Kainer at the 2014 Conquer the Canal Time Trial. She took Junior ladies and her her mom Audrey took Masters. Nice!! 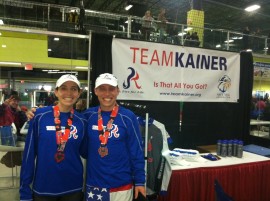 Here are our Team Kainer 2013 VA is for Lovers 14K winners! Brittany Van Nielen for the ladies (2nd in her age group and 5th overall!!!) and Billy Bylund for the men (3rd in his age group and 10th overall!!). Way to go Brittany and Billy!! TK kickin' butt and takin' names! 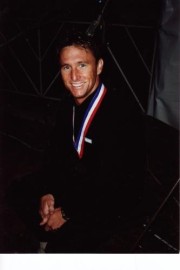 John lived his life with a passion and intensity that resulted in not only incredible achievements and accolades, but more importantly, tremendous personal relationships and friendships that supported him throughout his 11 year battle with cancer.  John's wife and children were the core of this support and brought immense joy to his life.

John attended the United States Naval Academy, wrestled all four years, and graduated in 1989 with a Bachelor of Science degree in engineering.  His first assignment was SEAL training in Coronado, California.  Graduating with BUD/S Class 166, John embarked on an exemplary naval career.  His assignments included SEAL team THREE, Naval Special Warfare Unit EIGHT, SEAL Team TWO and then Naval Special Warfare Development Group.  Receiving numerous commendations and always setting high standards, he was on the path to an outstanding career as a SEAL.  During a training exercise, John experienced a seizure while in the middle of a parachute jump.  He skillfully deployed his parachute despite the seizure and landed safely.  The ensuing medical evaluation, however revealed a brain tumor that resulted in his medical discharge from the Navy in 1999.  Although this medical condition cut short a stellar Naval career, the spirit of competition that resides in every SEAL remained strong.  In the subsequent years following the diagnosis and treatment, John completed three marathons, two Raid Galuoises adventure races and two Ironman distance triathlons.  He was the epitome of a true warrior, competitor and dignified individual.

In civilian life John worked for Ethicon Endo-Surgery Inc., EMC Corporation, and during the last five years with DePuy Orthopaedics as a sales manager for joint replacement products.  He worked directly with orthopaedic surgeons, earning their respect and friendship as evidenced by the support the medical community provided him in his final weeks.

On their own, John's accomplishments are amazing but even more so in light of the fact that many were achieved after he had been diagnosed with brain cancer.  In the years following the initial diagnosis in 1998, John conquered the most grueling of athletic endeavors: Raid Galuoises adventure racing, Ironman triathlons and marathons.  More importantly, John married the love of his life, Betsy Byron Kainer,and had three beautiful children.  Team Kainer is devoted to pass on John's "fire for life" to all those who face life's challenges.
﻿